Giving
Give to the Parish
St. Alphonsus Legacy League 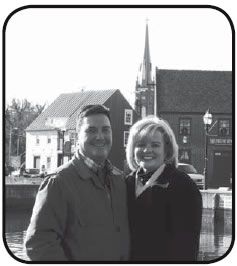 Giving Their Time, Talent, and Treasure

Patrice and Eammon McGeady in historic Annapolis with St. Mary's steeple in the background.
The gift of a Catholic education is one that continues to give its recipients a moral foundation for many years after we leave the classroom. Many of us were blessed to attend a parochial school, whether it was St. Mary's or another school. Our parents made the choice and the accompanying sacrifices so that we could learn and grow in our faith. One couple, Eamonn and Patrice McGeady, inspired by the example of their own parents' choice of Catholic schools and their own love of St. Mary's School in particular, decided to make the dream of a Catholic education possible for other students by creating The McGeady Family Endowed Scholarship Fund in 2004. This scholarship awards one outstanding St. Mary's Elementary School graduate a four-year, $1,000 annual scholarship to St. Mary's High School.

Meet the McGeadys
Patrice McGeady's family, the Perrys, moved to Annapolis when Patrice was 10 years old. She started at St. Mary's Elementary School right away. Because of space limitations, however, her parents were unable to get her other siblings into the school. Eventually, all four Perry children would graduate from the high school. Her parents, who just celebrated their 57th wedding anniversary, became active parishioners at St. Mary's Church. Her father is still very involved and has run the St. Vincent de Paul Giving Basket Program for about 10 years. Patrice, in keeping with her family's tradition, continued her education at Loyola University (formerly Loyola College) in Baltimore.
While his future wife was attending St. Mary's School in Annapolis, Eamonn was attending Mount Washington Country School (a Catholic military elementary school), then matriculating to Calvert Hall. He grew up with a strong connection to the Annapolis area and many fond childhood memories of sailing and spending time on the water at his family's place on Round Bay in Severna Park. A weekend at Sherwood Forest in 1975 led to a blind date with Patrice, and the couple stayed friends throughout college, with Eamonn graduating from McDaniel College in 1980 and being immediately commissioned as an offi cer in the Army.

When the couple married in 1984, it was natural that they would choose St. Mary's as the site of their wedding. The young couple went directly to Germany with the Army and their son, Manus, was born just after returning to the Annapolis area in 1989. Upon their return, the family "tried other parishes" before concluding that St. Mary's "was a good fit, and it felt like home!"

Eamonn became a lector and also has served on the Pastoral Council, School Board, and various parish and school committees [beginning during Father Murray's last year and serving until Father Kingsbury arrived]. During his time, he served jointly on the council and the school board and worked on the restructuring of the school board. In 2001, he was part of the team that was tasked with searching for not one principal, but two—simultaneously searching for leaders in both the elementary school and the high school. He vividly remembers working with the great search team that included Mary Ann Gordon, Mollie MacAdams, Sister Elise Mary Saydah, SSND, Marcia Verploegen, Ray Crosby, John Lamon, and Margaret Crabtree on this challenging task.
Patrice has played an active role recently as a member of the revitalized Alumni Association Board of Directors. Her St. Mary's friends have been her friends for life, and she believes that the association gives alumni a mechanism to get involved and to reconnect. 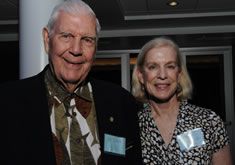 Who Is Commander Al Vittek?
Commander Al Vittek has been a St. Mary's parishioner since 1959. All three of his children—at some time—attended the school. He remembers it in those days as "a small school with very strict nuns."
He was born in northeast Baltimore in 1921. He is a second-generation American whose family came from Bavaria and Bohemia. He attended St. Michael's in Overlea and Kenwood High, both in Baltimore County. In 1937, when he turned 16, he enlisted in the Navy with his parents' approval and the agreement that he would finish high school first before being called.

He was called to duty in 1938. After World War II, where he served in Algeria, Italy, England, France (including Normandy) and the Pacific, he made the Navy his career. This decision took him around the world to Korea, through five commands, to the Naval War College, and on a final tour at the U.S. Naval Academy (USNA), where he was the head of navigation instruction. He was promoted 12 times up to the level of commander.
In the Navy, Commander Vittek spent a lot of time at sea while Mary raised the children. He was away so much that once when he left, after being home on leave, his youngest daughter thought he was a stranger who had taken the family's car. His military salary also made it hard to pay for three children in high school getting ready for college, so he left his naval career in 1960 to become the "first stockbroker in Annapolis" that year.
It took Commander Al three years to establish a contact base to earn a living and support his family. When he took his first paycheck home, he was a bit discouraged. He showed the check to his wife and said, "We can eat it, drink it, or frame it." In the coming years, he succeeded in his new career. By 1999, after managing at Alex Brown for 30 years, he moved to RBC Dain Rauscher. He retired in the early years of this decade.

What motivated him to begin giving?
He began supporting St. Mary's in the early '90s when Father Tom Sigonolfi was pastor. Commander Vittek was the stockbroker for the church.

Additionally, he saw a great need to provide financial support to families wishing to send their children to St. Mary's School. Commander Vittek became a pioneer member of the St. Mary's Legacy League by establishing an endowment to create income to support the tuition assistance program in perpetuity.
How do you see giving to the endowment as different from giving to offertory or restoration and maintenance?
"It offers the opportunity to designate how money can be used." Commander Vittek really wanted to see his endowment become tuition assistance directed toward students who value a Catholic education.
What would you say to other parishioners who are considering an endowment gift?
"People should take the time to explore the benefits of giving. Stock is so easy to give and get; you get to give the gift and get a tax benefit. Plus, by supporting St. Mary's, you can give without being subject to capital gains. It's a painless way to give."

St. Mary's is deeply grateful to Commander Al Vittek. Students and families will benefit from his generosity for many years to come.
What is an endowment?
A donation of stock, cash or property. A financial contribution that is invested to grow annual earnings which are used to support operations or specific projects initiatives of an organization. A set percentage of earnings drawn down annually, while the principal donation amount remains is intended to remain intact, to provide a perpetual source of revenue support.
Example of an Endowed Gift:

Step 1: $50,000 principal gift of stock, cash or property in 2011 to general fund or donor restricted fund
Step 2: Charitable Deduction to donor in 2011
Step 3: Principal gift invested to earn interest
Step 4: Approx. $2,500 donation to organization in 2012, 2013, 2014, etc...to be used for operations, maintenance, tuition assistance, where needs are greatest (*Note- Endowed funds are subject to investment performance and policies set by parish leadership.
Step 5: Regular reports sent to the donor annually with detailed fund performance and how assets were used.

Planning your estate and legacy for future generations including your charitable interests takes careful evaluation. Consulting with the appropriate professionals can assist you. Discussing your charitable intentions with us can lead to a much better result than going it alone - and will ensure that your gift is used just as you wish. We can give you valuable information about any of the creative giving techniques mentioned in these planned giving pages.
Act now to take the steps that you need to do to be a good steward of the resources you intend to leave behind. You can contact us below, or use our request for information form to get more information.
Mark Hartzell
St. Mary's Chief of Staff
Advancement
109 Duke of Gloucester St.
Annapolis, MD 21401
Tel: 410.990.4042
Fax: 410.263.4553
mhartzell@stmarysannapolis.org